I decided to be part of this project because I love crafting and vegan crafting is a real bonus!

I was a long time vegetarian and had been feeling that my choices were incomplete because of the horrible atrocities occurring on egg and dairy farms. I could no longer eat dairy and eggs. My banner is simple, "Go Vegan". We have a million excuses for why we be vegan. Put that aside and just Go Vegan!

I decided to be part of this project because I want to take advantage of an opportunity to participate in a unique vegan activism project!

My design, Peace Love Vegan, explains why I went vegan. When I learned about the horrors of factory farming, I immediately went vegan because horrible violence to innocent beings does not align with my beliefs of love and peace. 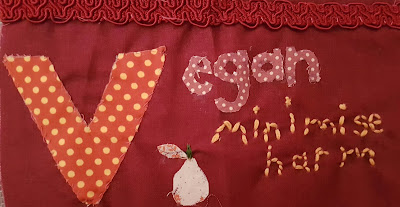 "Minimize harm" is the theme of the newest inspiring and beautiful addition to the VC banner collection.

Fellow vegan craftivist, Bea, from the UK, explains that she, "became vegan from vegetarian once [she] found out about the extent and scale of suffering in the dairy and poultry industries."

She added that, "to minimize harm means to me - a small step to avoid all animal products - but to do all an individual can."
Posted by Unknown at 1:38 AM No comments: 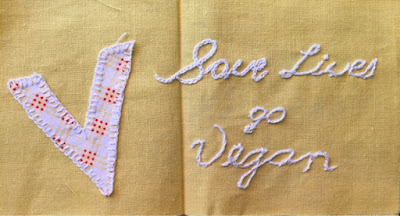 Submission #17 comes all the way from Australia! Made by Janis L., the banner reads, "save lives, go vegan."

Janis chose to take part in The Vegan Craftivist Project because, she wanted "to do something to help stop animal cruelty and slaughter."

Janis is vegan because she is "against animal abuse, cruelty, exploitation, suffering, and slaughter. It makes my heart ache."

Posted by Unknown at 6:39 AM No comments: 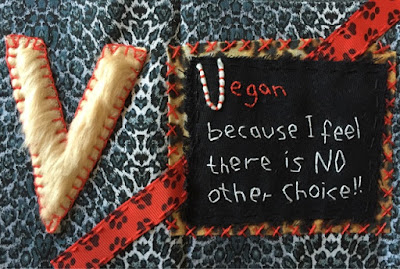 I received this wonderful submission made by Liz M. from England!

Liz says, "my designs were inspired by the animals that I hope I play a part in saving by being vegan - not just the animals being slaughtered for food but also animals used in entertainment, etc.

I became vegan at the age of 15 when I realized that the animals on my plate were no different from the animals we had as family pets. I couldn't be part of that anymore.

I like the idea of vegan craftivist projects because I want to feel useful and feel like I am still part of a movement even though I am physically unable to be part of a lot of actions.

Everyone has something to give in life."
Posted by Unknown at 10:12 AM No comments: 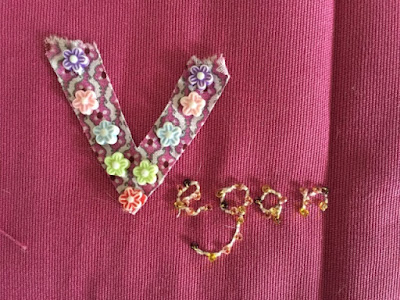 This banner comes from the UK and was made Jan G. with some lovely beaded work.

Jan specified that she's vegan because she "likes her animals alive."

Posted by Unknown at 2:39 AM No comments: 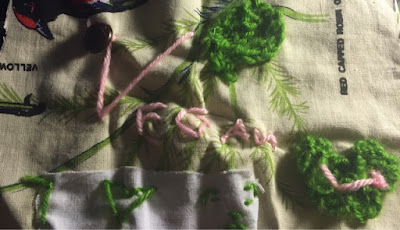 Submission #14 was made by the lovely Mia, a 10 year old vegan and craftivism from the UK!

Mia says she is vegan for non-human animals, "because...everyone has rights and animals don't deserve to be killed." She chose to take part in this project, "because [she] loves crafts and wants others to know how good it is to be vegan!"

Follow Mia on her very cool blog: Little Mia BIG WORLD
Posted by Unknown at 5:07 AM No comments: